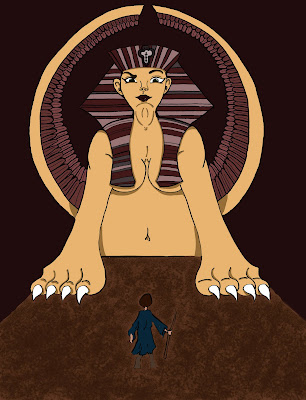 Here lies the majestic Sphinx, creator of riddles, challenging Oedipus on his journey.
According to Encyclopedia Mythica,

The Greek Sphinx was a demon of death and destruction and bad luck. She was the offspring of Typhon and Echidna. It was a female creature, sometimes depicted as a winged lion with a feminine head, and sometimes as a female with the breast, paws and claws of a lion, a snake tail and bird wings. She sat on a high rock near Thebes and posed a riddle to all who passed. The riddle was: “What animal is that which in the morning goes on four feet, at noon on two, and in the evening upon three?” Those who could not solve the riddle were strangled by her.Finally Oedipus came along and he was the only who could answer that it was “Man, who in childhood creeps on hands and knees, in manhood walks erect, and in old age with the aid of a staff.” The Sphinx was so mortified at the solving of her riddle that she cast herself down from the rock and perished.