After nearly a week hiatus that is. Thursday morning my computer began shutting itself off of its own volition. I took it to the Apple Store and discovered that many of the early 20 inch iMacs have a manufacturer’s defect regarding the power supply. Some of you may have seen information on forums to that effect. They kept it over night and then called to say they would replace the power supply, which would take 2-4 days. The next day (this is now Saturday) they called to say that the power supply didn’t work, and that they would be giving me a new computer, and would I like a data transfer of all my info? Sure!

So today I now have a new machine, 1 GB more of space than I had before, and no weird mysterious shutting off problems. I highly recommend to all you Apple users out there that you get Apple Care – it’s worth they price and my replacement computer ended up being free as a result!

So now that I have my baby back, I bring you: 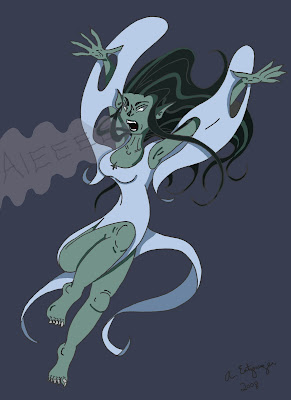 Known as the Bean Sidhe in Irish folklore and the Caoineag in Scottish folklore, the banshee is a wailing spirit believed to traverse the hillsides who appears near homes when someone is about to die. She’s also the daughter of Oberon and Titania for all of you Gargoyles fans.