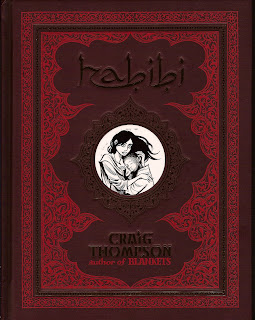 San Francisco’s very own Cartoon Art Museum celebrated the release of Craig Thompson’s latest graphic novel “Habibi” this evening at 7 pm. It was a delightful showcase of Thompson’s artistic endeavors as well as an in depth look at how the artist created the 600 + page tome. That’s right folks – 600 pages of gorgeous art. Not only is the line work beautiful but Thompson was open and honest about feelings of doubt, writer’s block, and how he persevered through the seven year undertaking.

After describing the process and themes of the book, he answered a generous helping of questions from the attentive crowd of all ages, ranging from who inspired him to how the Islamic themes in the book have influenced his own perception of the world and its’ peoples. He noted that while he understood a great deal about Christianity, having grown up in that environment, he knew little about Islam and Muslims before starting his epic research quest (something he likened to procrastination). As he worked on the book, he became acquainted with many Muslims who later became close friends. They offered him advice as well as helped him translate many of the passages in the graphic novel from English to Arabic. Thompson also studied the Koran in English, and the novel is filled with passages relating stores such as the tale of Abraham’s sons Isaac and Ishmael. 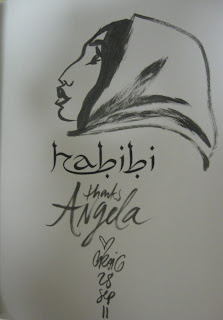 Currently I am on page 20 of his work and I am thoroughly enjoying every bit, from the lavish ink detail to discovering the deeper meaning of the stories being told. And as a fan of “Blankets,” one of my all-time favorite novels, graphic or otherwise, it was quite exciting to meet Thompson in person. I found that comic book artists in particular are fascinating people, and it is refreshing to know that there are individuals out there who still love using pen and ink to create. Computers are wonderful devices, but they cannot replace the tactile beauty of watching pigment soak into a page. Praise also goes to the Museum for showcasing a truly talented artists. The general public often thinks of men in tights whenever comics are mentioned. Superheroes are awesome and no one compares to Spider-Man, however there is more to this art form than caped crusaders, and I salute an institution that widens the eyes of the public.

Thompson is an honored guest at the Alternative Press Expo this year, so if you were not able to attend the Cartoon Art Museum’s lecture, it is worth your time to visit APE and hear more about Thompson’s artistic process and purchase a few books as well.