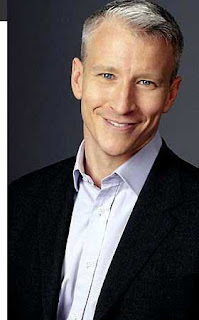 Yes, the myth, the man was at Barnes & Noble on Monday. So exciting!

Oh yeah, and there was this other guy there – Jeffrey Toobin. He wrote a book called “The Nine” about the Supreme Court. Man knew his stuff. Anderson interviewed him for 25 minutes before jetting to CNN headquarters. Jeff then amused us with interesting tales about the famed and mysterious Court, then opened the floor for questions.

I always love audience Q & A sessions. Inevitably there is always some crazed person who pontificates about their life without actually asking anything, or who tries to ram some point that has nothing to do with anything down the throats of the audience, or someone who is downright pathetic. In this case, there was this young-ish guy in the back that started to get into some conspiracy theory about 9/11 that had jack squat to do with the topic,