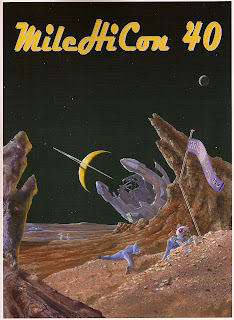 I had the great pleasure, thanks to my friend Rose Beetem, of volunteering for the 40th Annual MileHiCon in Denver today. It was quite fun! I have been to cons in Texas (Wizard World Dallas – first year held!) and the East Coast (Big Apple Con! New York Comic Con! Mocca Fest! Onna Fest! Katsucon!) but was beginning to fret that such interesting times were not to be had in Colorado.

But oh, how wrong I was.

I arrived at 8 a.m. to register and sign up to volunteer and was helped by no less than five people – Annabel, Steve, Ron, Suzi and Richard. I then met up with Rose for pre-event coffee and breakfast and met several of the authors giving panels later that day including Nicole Givens Kurtz, Tim Powers and David Boop. Very excellent and enjoyable folks.

And that, in fact my friends, was the theme of the Con. I must say that the people I met were some of the friendliest Con folks I’ve ever worked with or listened to. My previous Con experience has been with comic book and anime conventions so it was interesting attending a predominantly literary con (and a scifi/fantasy one at that) for the first time. And the Dealer’s Room was selling Dr. Horrible goggles! And Captain Hammer t-shirts! How awesome is that?! Oh, but if I only had more expendable income! Curse you low funds! Grrr!

While in the Dealer’s Room I also met Stan Yan of Squidworks, the local comic book collective. Man, was I glad to meet him. I was beginning to think that myself and my handful of comic book friends here in town were the only ones in the state that read comics. Stan proved me wrong. Squidworks meets once a month on the second Sunday of each month and you can check them out here. I’ll definitely blog about them come November.

I also learned how to BUILD MY OWN WORKING LIFESIZE R2D2, courtesy of Lynelle Phillips’ panel. Did you know that people do this for fun? I had no idea. It’s expensive, but interesting, I’ll tell you that.

And I met Hugo and Nebula award winner Connie Willis, who is an absolute hoot. One of the funniest speakers I’ve ever heard, and considering she was talking about WWII, not typically considered comedic fodder, is saying quite a bit.

I also had the great pleasure of volunteering for Jeanne Stein and Robin Owens’ panel, both of whom read from their upcoming novels, and meeting Susan Crites, owner of Neon Hearts, an online used book store. Lovely ladies!

Since MileHiCon is on the smaller side of Cons, you have the opportunity to actually talk to authors and guest speakers for a longer period of time ( 10 – 30 minutes instead of 2, on average), there is more of an opportunity for you to volunteer for rooms with panels you’ll like, and volunteers got a discount on parking.

The downside is that some of the panels were rather obscure. And some I just didn’t like. I volunteered for one that ended up being on cannibalism in film and literature. Didn’t realize it would be on cannibalism. I didn’t see the sign until afterwards. The presenter was actually really cool and knowledgeable and the audience was fun but quite frankly, that’s just gross. Eating people. Ewww. And the panel on Joss Whedon was disappointing because instead of it being about Joss and say, how he gets ideas, or how he is so successful, became a group of people lamenting over the loss of Firefly. And I love Firefly. But EVERYONE AND THEIR DOG is in agreement that Fox totally blew it with that one. That’s not news. Let’s lay it to rest and move on by supporting Dollhouse in January. Thank you. But on the upside I learned about stuff that I didn’t know even existed (like droid building) and I even learned a few Joss and cannibal facts. Facts I’d rather not know, but hey, knowledge is power. I guess. So not a total loss with those two.

I encourage you all to go tomorrow if you have the chance. If not, they’ll be back October 23, 24, and 25, 2009. And if you volunteer for 8 hours, you get a free staff shirt. And raffle tickets for prizes! I’ll post my winnings if I get ’em on the blog.