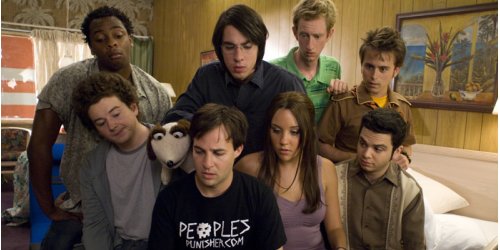 Due to an unforeseen rainstorm preventing a trip to the zoo “Look Jahkwona, wet, miserable animals! Fun!” my little sister and I hoofed it to the local megaplex where we were greeted by a paucity of movies aimed at anyone below the age of 19. None were suitable for the kid, except for one “Sydney White.”

Here’s what I knew about this movie:

Miss Bynes is the anti-Lindsay, goofy and beloved by tween and teen girls everywhere.
In other words, safe for a 9-year-old.

So off we went, and while they didn’t break the mold with his one, it got the job done.

Basically story goes like this – cute and lovable Sydney White (Bynes) lost her mom at age 9 and was raised by cute and lovable dad Paul (Johnathan Scheinder) on a construction site. So we’re led to believe that even though she’s got Oxyclean skin and can apply make-up better than most supermodels, she knows more about a Phillips head screwdriver than the perfect prom dress.

But Syndey longs to follow in the footsteps of her dearly deceased mommy, and decides the best way to do so is to join mom’s sorority, Kappa Phi Nu, upon entering her freshman year of college.
So off she goes to Southern Atlantic University, but trouble is a brewin’!

Enter Rachel Witchburn (aka Sara Paxton aka Evil Queen) stereotypical blond queen bee we’ve already seen in every other teen movie made in the past decade (“Mean Girls” anyone?) Ms. Witch is president of both the sorority house AND student council (natch). And wouldn’t you know it, Rachel’s goal is to be the fairest in the land – via a “Hot or Not” list posted on the school’s MySpace page, the magic mirror updated for the 21st century blogging generation. She also has her peepers set on turning the Vortex, a sadder than dirt student residence house and home of the seven dorks, into her own private campus complex with the help of her parents money and funds from the family of her ex, Tyler Prince (aka Matt Long, and if the names aren’t enough to convince you what role he is to play, I can’t help you.) Prince could care less about his old flame, for even though he is the Frat Boy King, he has a heart of gold.

But enter Sydney! Because of legacy Rachel has to let her rush with the sea of blond cookie cutter fembots. She gives poor Sydney hell but the girl still catches the eye of the Prince, befriends a Dallas-cheerleader-like sidekick girl named Dinky and meets the first of the dorks (the dwarfs of the story), Lenny (Jack Carpenter in a role that quiet frankly is suited for a better movie).

However Rachel’s bile and insecurity pushes her to use various loopholes to banish Sydney from the sisterhood and humiliate her in front of everyone at the rush dance. Poor Syd is left with no place to go, but look! The dorks have emerged and offer her a place to rest her wary head! And all of them are straight out of the 1937 classic with one-dimensional updates. There’s Terrence (Doc, aka Jeremy Howard) a dude who’s been in college 6 years past his graduation date and doing weird experiments with mice; Gurkin (Grumpy aka Danny Strong) an angry conspiracy theorist blogger; Embele (Sleepy aka Donte Bonner) a Nigerian who never adjusted to the time zone difference; Spanky (Happy aka Samm Levine) a horny ladies man-wannabe with zero luck with the opposite sex; Jeremy (Bashful aka Adam Hendershott) a who speaks through the hand puppet of petshop.com and George (Dopey aka Arnie Pantoja) a Tiger Scout who can’t tie knots and earn his last merit badge. And of course, Lenny, (aka Sneezy) who is actually more like Doc, for he leads this pack of motley geeks who have found solace in the deathtrap of a dorm they call home.

Sydney, firecracker that she is, decides to help her new friends by getting them better housing, and the only way to do that is to get them to run against Rachel in the student council elections.
They decide Terrence should run for prez (why? who knows!) and they campaign in earnest. But stuff happens, mainly Terrence getting disqualified for already graduating, leading them to pick Sydney to run, which should have been there first clue anyway. Sydney obviously (because it’s her show, isn’t it?) wins over the hearts and minds of the people by reaching out to everyone not in the Greek System. Which is, in her own words, 80 percent of the student body.

This propels her to the No. 1 slot on the “Hot or Not” list, and the Evil Queen in a last ditch effort to destroy the fair princess, enlists the help of a techno-goth to send a computer virus (the poison apple) to Sydney’s computer, destroying her term paper the night before the big stu. co. debate. Sydney pulls an all-nighter, and the debate nearly goes on without her, but lo! Prince Charming awakens her with a kiss inside the study hall, they rush to the debate where Sydney gives a lame “I’m a dork, we’re all dorks!” speech that unifies the masses and destroys the Queen.

In the end the Vortex is saved, Sydney gets the Prince, Lenny gets Dinky, and the Queen is kicked out of the sorority. The End. It’s all escapist-fluff, but the demographic it caters to voiced their pleasure at seeing their girl win. And there are winning scenes that come out of left-field, such as the Evil Queen paying the techno-goth in hotpockets, the dorks re-enacting fight scenes from “Gladiator” and even an homage to the “Hi-ho off to work we go” sequence of the original, with the seven dorks trapping through campus with picket signs instead of pick axes.

Mainly the problem lies not in the acting but the writing. In the hands of a better scribe, the movie could have been in the upper-eschelons of teen comedies. But for all its faults, it ain’t half bad.