Hello Readers!
Here is a repost of an article I wrote for the Women in Animation San Francisco Chapter Blog. You can find out more about our organization by visiting
www.womeninanimationsf.blogspot.com.

Enthusiasm for Frozen was palatable at the sold out Frozen: Art of Animation talk Friday night at the Walt Disney Family Museum. Lino DiSalvo, head of animation for the film and a Disney vet with over 15 years of experience at the company, led the audience on a fantastic and sometimes harrowing journey through the process of creating Disney’s 52nd animated feature film. 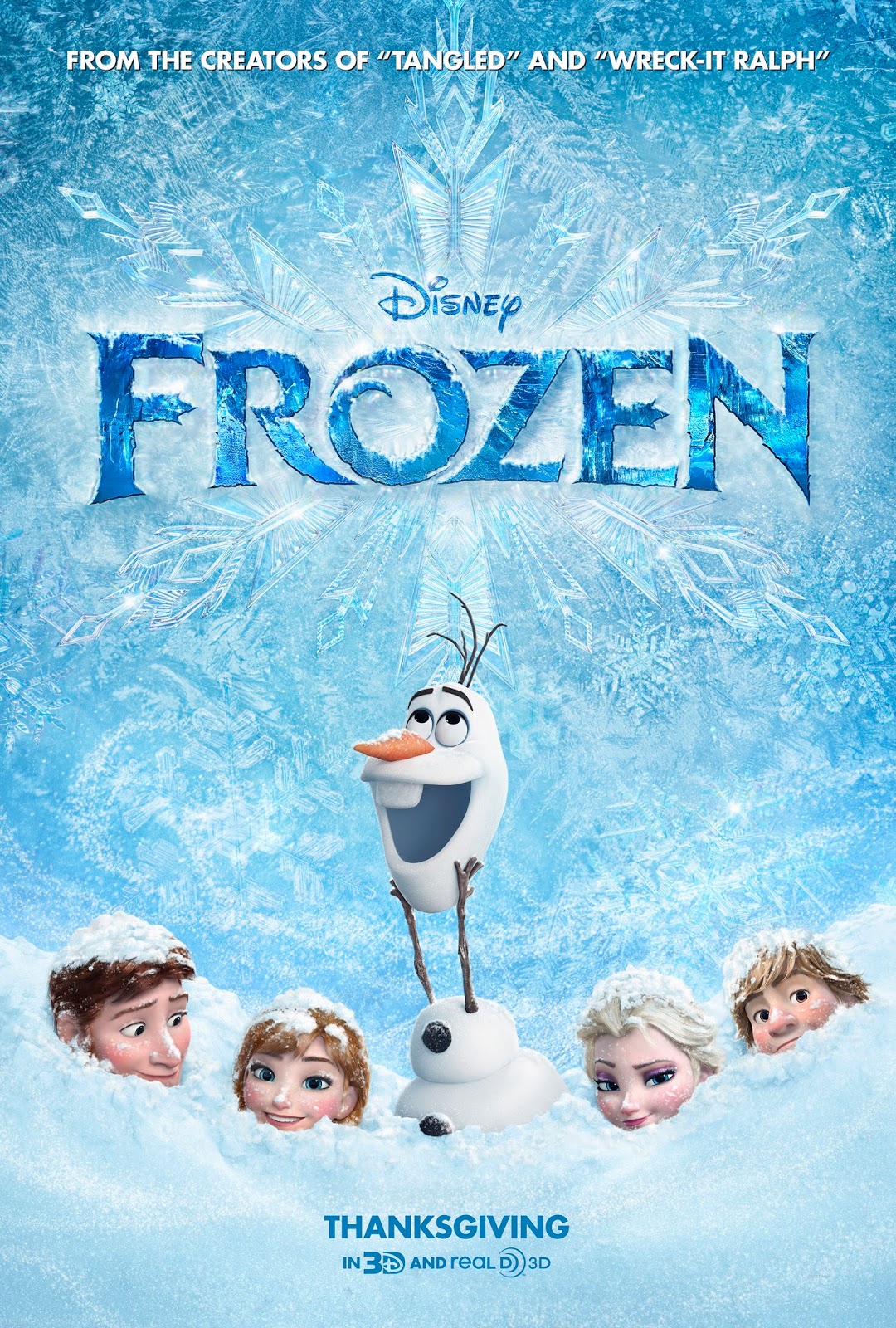 A Musical for Even Non-Musical People

“We watched every musical ever created,” DiSalvo said with a laugh as he chronicled the storytelling process. “[And] I started this journey hating musicals.”

It wasn’t the music he hated. DiSalvo grew up on classic Disney musicals and loved film. It was the “yearning look into the horizon” that truly bothered him.
He, along with the many other individuals who enabled the film to become a reality, wanted something more heartfelt for their heroines and the other characters.

He wanted the emotion of the characters to be so organic that they could not help but sing. “The scenes that worked in these films with singing, [there was] no other way for the character to convey the emotion they felt,” said DiSalvo. The dynamic duo of Tony Award winning scribes Kristen-Anderson Lopez and Robert Lopez enabled that vision to become a reality.

“They were awesome,” said DiSalvo.

Two of the other great challenges when creating the film were crafting the story and dealing with a tight production schedule. The Snow Queen remained on Disney’s radar for years, but it was not until Chris Buck and Jennifer Lee signed on as directors and Lee hemmed the version of Frozen that is now in theaters that the film truly clicked. One of the toughest parts was getting the story right. Their goal was to create a compelling narrative devoid of cliché. One major issue was that Elsa, the snow queen herself, played too much like a villain. This made it difficult for the staff to want to root for her by the end of the film.

“It’s a 90 minute film and you want to like the characters,” said Wayne Unten, supervising animator for Elsa. “To get her to the mountain top for ‘Let It Go’ you have to show what she’s been through. The villain part wasn’t working.” The story came together when Lee showed the staff the bond that needed to exist between Elsa and her sister Anna, and how that bond would ultimately save them.

“The film is family love, not romantic love,” said DiSalvo, crediting Lee with bringing to light the theme of the film. “Everyone in the room said that’s the film we have to make.”

To further illustrate the importance of this point, the directors held a “Sister Summit,” said DiSalvo, where every woman on the team brought in their sister to sit and talk about what it was like living with a sister. This provided a wealth of information to everyone on the crew and helped solidify in their minds the type of relationship they wanted Elsa and Anna to experience.

Time Waits For No One

Another major challenge was the release schedule. Originally slated for a 2014 release, the studio made the decision to release the film a year early in order for Frozen to be released for the Thanksgiving season, and to give Disney’s next animated release, Big Hero 6 a chance to shine during the following holiday season.

“When we went from 14 to 13 everybody freaked out,” said DiSalvo. “When we calmed down, we figured out how we were going to do this.” They succeeded in finishing the film by being efficient, said DiSalvo, solidifying the story, making solid acting choices, and overall working with some of the most talented individuals in the industry.

Audience members got a rare look into the inner workings of the Disney studio in Burbank, including photos of the story room, animator’s offices and the coup de resistance, a giant ‘A’ where animators who have completed their first film sign their names alongside revered Disney veterans like Glen Keane.

“The building says animation but it should say collaboration because that’s what we do,” said Unten.

DiSalvo explained the process of filmmaking at the studio, starting first with the three touchstones of what Disney strives for in all of its films: compelling stories, believable worlds and appealing characters. He also touched on five aspects of the making of Frozen that were crucial during the visual development, story and animation processes. These five enabled the artists to stay true to the character of the film and create a compelling story.

“Truth in Acting, “ said DiSalvo, “was the most repeated phrase during the entire production.” Disney brought in an acting coach who helped the staff delve into what defined each of the characters on screen. This included imagining the lives of the characters before and after each incident in the film. By pulling the bits and pieces from the characters lives, the artists were then able to achieve a stronger emotional core for Elsa, Anna and the other characters.

Along with working with an acting coach, the staff also hosted “Inside the Actor Studio” sessions with the voice actors, taking notes and recording how they sang so they could infuse the same level of resonance and emotion in the animated characters. The acting sessions with the acting coach along with working closely with the voice actors, as well as the animators acting out and thumbnailing character moments themselves, allow the heroines, heroes and villains of the film to be fully fleshed out characters instead of caricatures.

Casting and the Emotional Crescendo Board

The film crew created a “crescendo board,” said DiSalvo, a literal board mapping out the conflict and resolution of every scene in the film. This allowed them to track the highs and lows experienced by the characters so that they could build to pivotal sequences in the film without giving away too much information early on. It was crucial to follow the board to ensure that the artists build up the character to a specific emotion.

Every film requires hands on research, especially one set in a world of snow and ice. Disney sent the animators to Wyoming to explore what it would truly be like to live in a snow-covered kingdom. This led to crazy scenarios, including the animators tromping around in full length wool skirts to see just how difficult it would be for Anna to maneuver around. They also held races in the snow and soon discovered that it is incredibly difficult to run in knee-deep snow without falling on your face.

Collaboration with hand drawn artists, according to DiSalvo, is one of the most fun things about the film-making process.

The animators then went on to create screen tests to show the emotional range of the characters. These tests were later used as teaser trailers, including the ones below for Elsa, Olaf, Kristoff and Sven.

“If you can capture that little truth you’re on your way to something honest there,” DiSalvo said about the acting process. Each day the animators gathered in a room to watch the dailies, where the supervisors and directors watched their shots and gave notes. It was in dailies where DiSalvo and the team could analyze the acting, subtext and gesture of the characters to make sure that they flowed well within the story. “As animators we flesh out what the character is thinking and feeling,” said Unten.

“If there’s no heart behind the animation, then you’re just animating for the sake of animating,” said DiSalvo. For this reason the analysis went beyond the typical animation critique, which often focuses more on mechanics, such as fixing pops and improving arcs, and more about the acting.

Bringing the Characters to Life

“Each of us has different methods,” said Unten, “but the goal is the same, to create amazing characters.” His method included watching recording sessions with Tony award-winning actress and voice of Elsa Idina Menzel, acting out expressions himself, thumbnailing his ideas, animating the sequence, receiving notes from COO of Walt Disney and Pixar Animation Studios John Lasseter, and animating again. It is a painstaking process, but one deserving of the time.

“It’s not just a music video, every line means something,” said Unten.

The evening ended with DiSalvo and his team fielding questions from the eager members of the audience, who included everyone from students and professionals to small children.

DiSalvo gave a particularly good piece of advice to students, who are often inundated with cynicism from the industry.

“These movies are a hard journey,” said DiSalvo, and he credited the talent of his staff for making Disney a great place to work and make films.

“I think Frozen is a great example of artists believing in each other,” said DiSalvo.

And it is this belief that will continue to inspire future artists and animators the world over.

And for more info on Women in Animation San Francisco visit our Facebook Page at:
https://www.facebook.com/wiasf

On Saturday I had the great pleasure of meeting Andreas Deja and Carol Kieffer Police at the Walt Disney Family Museum. This Museum is one of the treasures of the Bay Area. If you have not been you must take the trek out to the Presidio. They offer classes and events every weekend, film screenings, a terrific museum, and the staff is delightful.

I wrote about the event for the Women in Animation San Francisco blog. You can read about their entertaining talk here.

Saturday I went to the Walt Disney Family Museum and drew some of the cutest farm animals ever. Love animals.