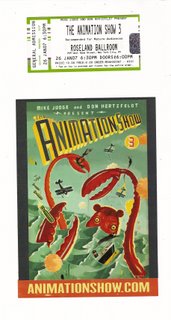 Fans of animation cheered Friday night as the Animation Show returned to New York City.
Held at Roseland Ballroom, the event featured special guest and 2 time Oscar Award nominee Bill Plympton. Bill gave a sneak peak pencil test of his latest feature, “Idiots and Angels” which will debut in 2008.
Following a round of trivia and a brief documentary chronicling the creation of the Animation Show (which prior to Mike Judge’s involvement, featured cartoons solely created by Bill and his partner in crime Don Hertzfeldt) the show began with a hilarious opening remarks segment by that genius of witt Butt-Head, of “Beavis & Butt-Head” fame, followed by several excellent shorts. On the lineup this year:

Dick and Jane for grown-ups in this hilarious dark comedy about two children who find an idol within a rabbit, and how their greed results in deadly results.

A young woman from Tokyo moves to London and experiences a heady tripp in her local neighborhood pool.

Everything Will Be Okay – directed by Ron Hertzfeldt

A man slowly loses his mind and all sense of reality in this hilarious take on everyday activities.

What war would look like if done using Lite Brite and Magna Doodle.

A sci-fi masterpiece that is rumored to be turned into a feature film by Tim Burton.

No Room for Gerold – directed by Daniel Nocke

Four animal roommates decide who will go and who will stay in this reality TV-like short film from France.

Everyone’s favorite hapless mutt returns – this time trying out his new gig as a guide for the blind.

A man’s world is turned upside down when a flood ravages his city.

A poignant homage to Jim Henson as hundreds of Kermit-like puppets deal with their creator’s death.

Game Over – directed by PES

Atari classics are remade in this fabulous short.

Ms. Quinn shows that her talent extends far beyond “Charmin” ads in this hilarious short about a women who dreams of becoming a filmmaker, and uses her sister’s wedding to experiment with her art.

Every film on the line-up entertained the audience, who laughed and hollered during the entire proceedings. After the film, Vic the MC presented trivia questions for prizes, including a boxed DVD set of the Animation Show Vols. 1 -2. DVDs, posters and t-shirts are available online at www.animationshow.com.

And as always, they except submissions year around, so for all of you filmmakers out there, send your shorts to: