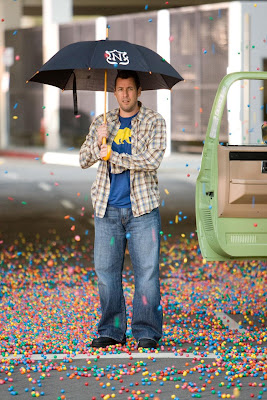 Adam Sandler is quickly becoming a more-family friendly comedian in the Disney flick Bedtime Stories. The premise is revealed succinctly within the first ten seconds of the trailer but it is a surprisingly heartwarming and cute tale with an actual plot.

Sandler plays Skeeter, a maintenance man living in the hotel that a rich tycoon bought from his debt-ridden father 20 years ago. Said tycoon promised Skeeter’s dad that when the lad was old enough, he would let him run the hotel. As can be expected in these types of movies however, that didn’t happen, but Skeeter works harder than anyone else there to repair everything and keep everyone happy.

The story kicks into high gear when Skeeter’s sister Wendy (Courteney Cox, who I am beginning to love in every single role she appears in) the principal of an elementary school about to get bulldozed, has to go to Arizona for a job interview. She leaves her two kids in the care of her brother at night, and her teacher friend Jill by day. Skeeter and Jill don’t get along at all, which means they’ll be madly in love by the end of the movie. But at least their banter is funny.

The movie turns into the movie preview at this point. Every time the kids and Skeeter tell bedtime stories, parts of the stories come true. Skeeter tries to use this to his advantage in order to win favor in the eyes of the tycoon – with mixed results. Hilarious shenanigans involved gumballs, dwarves, and a high speed motorcycle chase ensue.

In the end Skeeter is the hero, gets the girl, and in a lovely heartfelt B story saves the elementary school, which tycoon was going to tear down for the site of the new hotel.

A predictable film in some parts but kids will love it and it’s more enjoyable for grown-ups than they would expect.

And Lucy Lawless stares as a mean-hearted witch of a hotel clerk named Aspen. Her reactions to Sandler are worth the price of admission alone.

According to the ratings board, rated PG for mild language and rude humor but honestly I can’t recall what language they’re talking about. And the humor involves boogers, horse farts and, frankly, Adam Sandler. Typical kiddie stuff.