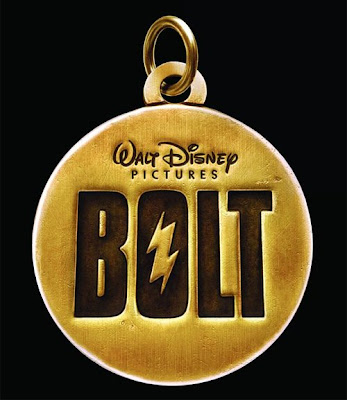 Finally saw Bolt with my buddy Anne tonight. Not a bad film. The kids in the audience (and there were A LOT of them) really enjoyed it. I even heard one start to cry when they thought that Penny was in mortal danger.

The movie goes like this: a dog, Bolt, and his “person” Penny fight against the nefarious Green Eyed Man, a slim super villain in Armani suits who has captured Penny’s father. But before he was captured, Penny’s dear old dad genetically modified Bolt with super speed, super strength, heat vision, laser shooting eyes and a super bark that can decimate heavy artillery. Together he and Penny are an unstoppable duo of crime-fighting might.

Problem is, Bolt has no idea that none of it is real. Unbeknownst to him he is the Buzz Lightyear of canines, a dog starring in a TV program beloved by millions. He spends his weekend in a trailer on the set, and everyone he sees is in on the act. Penny wants to take him home so he can be a real dog, but the director wants Bolt to think that he’s always in peril so he can get the best reactions possible. 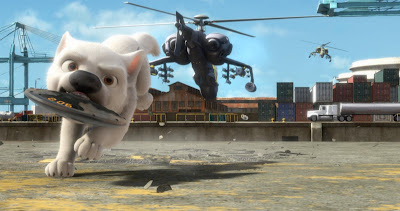 It’s a fine premise but the movie unravels once the set-up is established. Through a mishap Bolt escapes from his trailer and ends up shipped to NYC. He escapes, and together with a declawed cat named Mittens and a sidekick-wannabe hamster named Rhino, they go on an Incredible Journey-esque adventure back to LA in order to save Penny, who in the season finale was kidnapped by the Green Eyed Man.

There are plenty of opportunities for moral tales, warm fuzzies, and hamster ball silliness, but the movie lags in some places and the dialogue is too on the nose in others. And there’s not much of a B plot – Penny gets a replacement Bolt so that filming can continue but the dog only functions for two key scenes.

I’ve seen Wall*E and Kung Fu Panda, and I know now why Wall*E got the Oscar. But the kids will like it and the animation’s great.

Rated PG for live action-y like spy violence, one explosion, a firey set and a man getting doused in pepper spray (don’t worry mom and dad, it’s one of the funniest scenes in the movie.)