This week I had the pleasure of seeing TWO films at the dollar cinema, the only way to watch a movie as far as I’m concerned, especially blockbuster summer spectacles that looked iffy in the previews. If you can get passed the sticky floors and not so great projector quality, you’ll have a mighty fine time.

First film: Indiana Jones and the Kingdom of the Crystal Skull 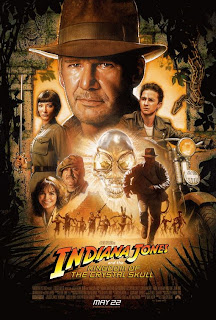 I saw Indiana Jones KOTCS on Tuesday, officially making me one of the last humans in America to see the most current enstallment of the renergized franchise. And…well, it’s no Raiders of the Lost Ark. Not by a looonnnggg shot. That did not diminish my enjoyment of the movie, but like Matt Fraction stated in his June Word Balloon interview, the more time passes after you watch this film, the less you like it.

And I totally get why.

See if you’re like me – a child of the 80s – then you’ve no doubt seen Raiders a minimum of 15 times. MINIMUM. When we lived in California it came on KCAL 9 no less than once every 3 months, and I always caught it at the exact same spot (when Indy is in the desert, digging for the awesome built to scale city map). I remember watching the spirits ascend from the ark and liquify people behind the safety of the living room couch (the best place to watch any and all things scary). The music from the film is permanently embedded in my brain, right next to my collection of cartoon theme songs.

And yet, we are drawn to this film like a moth to a flame. Why? Because Indy is an icon, right up there with Bond, hotdogs and every other cliched American thing we can think of. 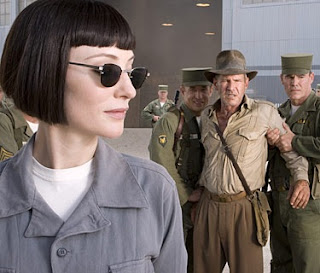 But friends, this is no Star Wars or Raiders. It’s not even Temple of Doom, which is saying a lot, considering how exceedingly annoying the screaming woman was (really, is there anyone else who was sad that she didn’t burn up in molten lava? I know I was.)

This, my friends, was an Indy movie that morphed into a weird hybrid of poor dialog, bland characterization, and National Treasure rip-off discovery with a bit of X-Files conspiracy thrown in for good measure. A funny film, but in a “Wow this is pretty ludicrous,” sort of way, not unlike the poor fodder thrown to the robots of MST3K. 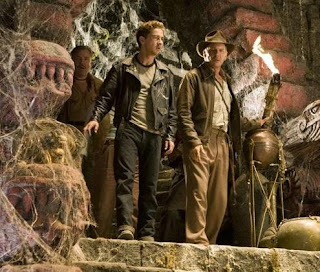 The sad thing is that there was absolutely no reason for it to be this bad. Harrison Ford, Shia LeBoef and Cate Blanchett are fine actors stuck in a badly written film with CGI monkeys. CGI monkeys. Really? Is that even necessary? And why is it that Cate’s Russian spy sounded like Natasha from Rocky and Bullwinkle? I kept waiting for her to bust out with “Must capture moose and squirrel!” 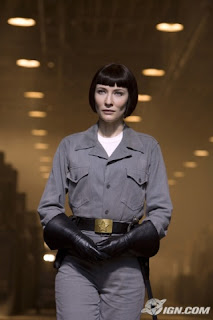 Team Lucas/Spielberg didn’t fare so well with this one. Which by no means will influence whether I see any more of their movies. Because I will. Because that’s how myself and every other person in the 18-49 demographic roll. Darn you, Star Wars and Raiders, we shall never be free from your death grip of awesome. 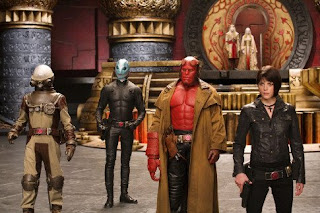 On the complete opposite side of the spectrum was last night’s film, Hellboy II: The Golden Army, which I also had near zero expectations of and was greatly impressed by the story as well as the creatures. Seriously, Guillermo del Toro makes Jim Henson’s creature shop look like child’s play.

Del Toro and Mike Mignola are cut from the same cloth. And you can definitely see how the director’s work in Pan’s Labyrinth plays out in this film. 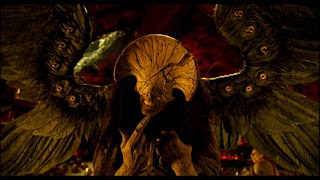 The best character by far was the Angel of Death, a beautifully creepy creation. I would like nothing better than to meet Guillermo and see the innerworkings of his mind when he creatues such fantastic monsters. Never have I seen an angel look like this. 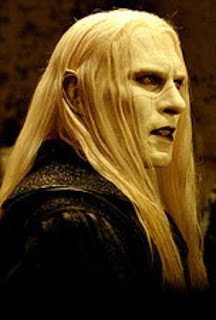 And not just the angel, but all of the creatures were fantastic, from the lovely yet strange Elves to the reinvisioning of Tooth Fairies as sadistic little buggers.

The best part of all of these creations is that they are not only scary, but beautiful in an odd way. They are more than monsters, each with their own motivations and feelings for why they do what they do, not unlike Frankenstein’s monster. 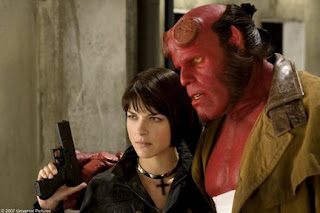 The supporting cast of creepies nearly overshadow everyone else, but all of them pull their weight nicely, particularly Ron Perlman as the cigar chomping Hellboy and Abe Sapien, who is given a little romance this time around. 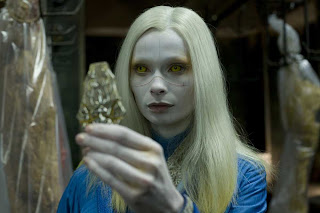 The flaw of the film though is that the theme is not given enough screen time.
Prince Neuda makes an interesting argument to Hellboy, why fight against your own for those who will hate you when you can join those who will view you as a god? It’s a rather compelling argument, given Hellboy’s appearance (he’s not named Hellboy for nothing you know), the fact that his best friend is a fish hybrid and his girl is pyrokentic which a propensity for blowing up buildings. It’s also a theme that
deserved more screen time, as it is mentioned only briefly after the Elemental fight scene and then becomes no more than an afterthought. Considering that this was truly the heart of the film, I am surprised that Del Toro did not give it the consideration it deserved.