Hey everybody here is version 2 of my pitch for the Animation Club’s fall interstitial. Now with better, crisper artwork. Enjoy.

Here it is – my Animation II reel. Man this was a tough class. I honestly felt that my skills were regressing from last year’s Animation I class. Currently I draw much better than I animate, which surprises me. It’s as if there is a disconnect between my ideas and what I am able to get across on paper. At times it is highly frustrating. However I tried my best to create worthwhile animation tests this semester. My teacher Michael Vickner commented today in class on how I have improved and that my characters have appeal. The thing to do now is to vastly improve my drawing skills by practicing even more everyday and going to even more workshops.

I am the most pleased with the “Bear Jump” and “Eel in a Box”. Those two came out well. My “Cat Walk Cycle” looks pretty good too. All animation done by me except for the Grandfather in the tug of war segment – that part was animated by my animation partner Titus.

Here is my final animation for Eel In A Box. An Eel discovers a box – the perfect place to hid out. But will he be able to get the box open?

Here are my two animations from class today. I am happy with how they turned out – I spent quite a bit of time on both of them. My notes today were to slow down the secondary action on my character’s hair, and to push the exaggeration of my eel’s movements. My teacher also recommended that I cut out some of the frames of the first few seconds of the eel’s swim so that I have more frames for the later actions. That way everything will read better.

I am super excited about this – Turner and Sony are releasing “UPA Jolly Frolics” on DVD on Thursday. What is UPA you ask? Only one of the coolest companies ever to have existed in animation history. 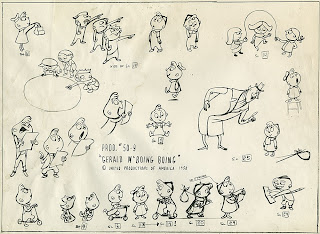 Several of the Disney strikers left the company in the 40s, went off and formed their own company, the United Productions of America and produced several Academy Award winning shorts, including “Gerald McBoing Boing” based on the Dr. Seuss story of the same name of a boy who speaks in sounds instead of words. 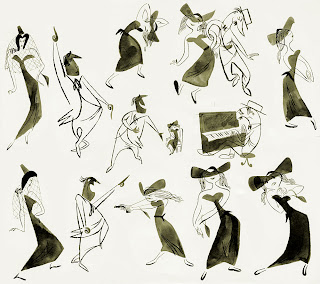 This is the group that brought you “Ragtime Bear” (the very first Mr. Magoo short), “A Unicorn in the Garden”, “Rooty Toot Toot” and Edgar Allen Poe’s the “The Tell-Tale Heart,” one of the darkest films in the medium. We watched all of these shorts in animation history class last semester and I instantly fell in love with the limited animation and graphic style, especially “Rooty Toot Toot”, one of the best cartoons I’ve ever seen. 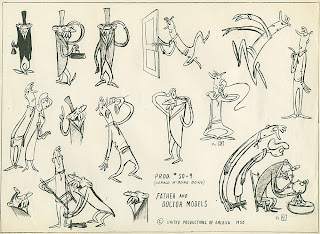 Sadly the company began to decline due to pressure from the House Un-American Committee, threatening legal action if anyone in the company was suspected of being Communist.

However, you can PRE-ORDER the DVD on TCM.com site right now and enjoy the films that heavily influenced Disney, Warner Bros. and many of the cartoons you now see on Cartoon Network. The DVD includes 38 shorts and commentary by Leonard Maltin ships out on March 15th.

THIS is what I was trying to do with my walk cycle for Animation II.

The cycle was done by Stephanie Blakely.

Here is my first animation for Traditional Animation II. I really like this class. It is taught by Michael Vickner, the same guy who oversaw last semester’s animation workshop. He’s really good about explaining concepts and I know that I will do well this semester.

I received a great reaction for my first animation:

Michael pointed out two things that will dramatically help me improve. The first is to make sure my arcs are followed correctly. The three frames before Cubby lands are a little strange – the poses are not in the best direction so it looks odd. The second thing he recommended was to add variety by changing up the timing. I shot everything on 2s in ToonBoom, he recommended using 1s, 2s, and even 3s when animating to add texture.

Next week: a dog walking!

Here is my animatic for “Kesu”, a short film debuting next Spring.

A Hunter seeks out a Mammoth with unusual results.

Thus begins my animated short “Kesu.” Why do a 15 second animated short for class when you can create an entire thesis-film like project for the Spring Show? Sounds like a plan to me. The first 15 seconds are my class assignment, then next minute and 25 seconds are the rest of the film.

One day I will create a short subject. But I love fully fleshed out stories. It’s why I write screenplays instead of short stories and novellas.

Our professor gave us excellent advice – create 10 to 20 story ideas with 5 unexpected outcomes and 5 reactions to each of those outcomes. That led Alice down the rabbit hole of discovery. I planned on filming “The Fighter.” I had created preliminary storyboards, character designs and  was ready to go. But something did not feel right. So I followed my professors assignment and started writing ideas last Saturday at Chipotle. And then the 11th idea came to me.

So don’t listen to anyone who tells you wait around for inspiration. Get out there and churn out as many ideas as possible. That’s how you come up with something. Blood and sweat. (And good food – that helps.)

Here’s the set up of the storyboard that I pitched in class: 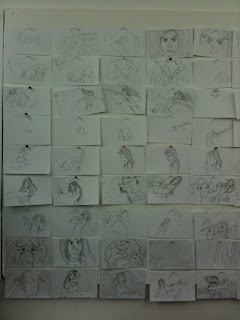 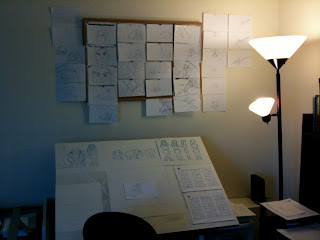 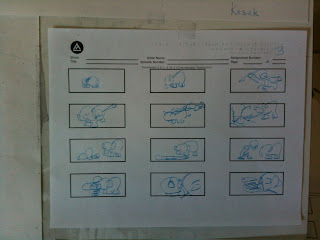 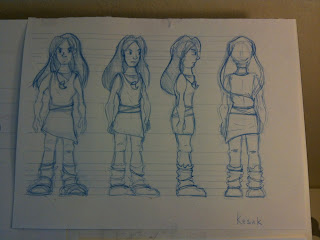 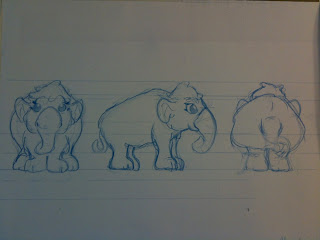 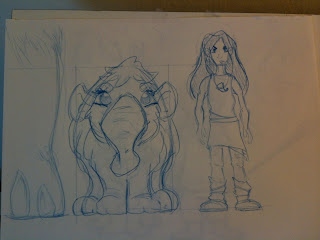 Kesu and Alamet in action sketches: 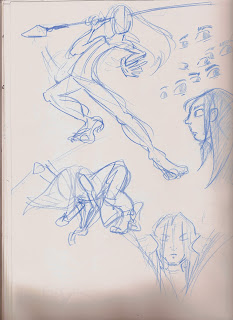 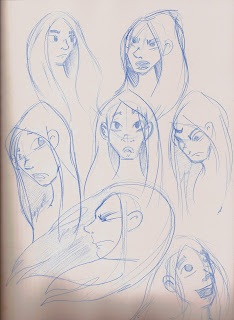 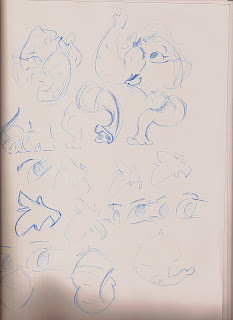 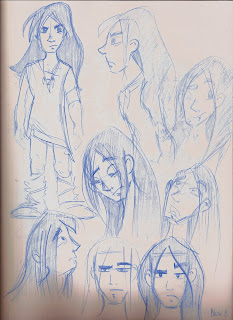 The second triumphant video in my ongoing saga of pencil test masterpieces. Look out, world.